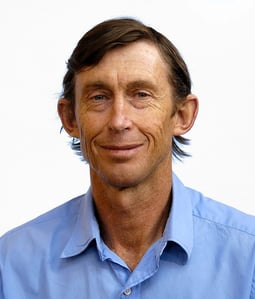 Tim Macartney-Snape AM OAM, BSc, 59 (at Jan 1 2016). A twice honoured Order of Australia recipient, Tim was born in Tanzania and moved to Australia in 1967 to a small farm in north eastern Victoria. Educated at Geelong Grammar School, Tim attended the Australian National University in Canberra where his passion for mountaineering developed, becoming the only summiteer on the ANU’s 1978 Dunagiri expedition in the Indian Himalaya. Tim went on to climb dozens of peaks in the Himalaya, and was the first Australian to ascend Everest in 1984, a feat that was also achieved without the aid of oxygen and via a new route. He returned to Everest in 1990 when he climbed the mountain from sea level on the Bay of Bengal. Tim was introduced to the understanding of the human condition in 1987 by Jeremy and became one of the Founding Directors of the WTM in 1990, and a Patron of the WTM in 2009. Tim was a founder and director of outdoor equipment business Sea to Summit for 26 years, is a consultant to World Expeditions, and assists with the WTM’s public relations.