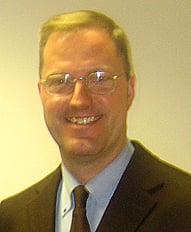 In March 2007, a trial began in the Supreme Court of New South Wales to determine defences and damages following a jury’s 2003 finding that the Australian Broadcasting Corporationhad defamed Jeremy Griffith and Tim Macartney-Snape in a 1995 ABC-TV Four Cornerstelevision program. During the trial, four international scientific experts, including Dr Casebeer (photo), took the stand in defence of the scientific and scholarly standard of Jeremy Griffith’s work.

From the report by Dr Casebeer tendered at the trial:

‘It [Beyond the Human Condition] is eminently readable, and the ideas contained in it are expressed in crisp and relatively jargon-free prose...Mr. Griffith makes several original claims in the book, and advances a thought-provoking hypothesis about the origins of human angst from the process of empathy-related indoctrination and learning that is unique and interesting…Mr. Griffith’s book is provocative and well-written, and surfaces a large number of important issues in an intelligent manner. His project is important to think about, and while there are some things to debate from a scientific and philosophical perspective in his book Beyond The Human Condition, there is also much that would be considered true by members of the relevant scientific disciplines.’

Dr Casebeer is a career intelligence analyst and Lieutenant Colonel in the US Air Force. He holds degrees in political science from the US Air Force Academy (BS), philosophy from the University of Arizona (MA), national security studies from the Naval Postgraduate School (MA), and a joint PhD in cognitive science and philosophy from the University of California at San Diego, where his dissertation received the campus-wide outstanding thesis award.

Formerly an Associate Professor of Philosophy at the US Air Force Academy, during 2005-2006 Dr Casebeer was project fellow at the Carr Center for Human Rights Policy at Harvard’s John F. Kennedy School of Government, where he focused on ethics and counter-terrorism policy.

He is also a term member of the Council on Foreign Relations, an Associate of the Institute for National Security Studies and an experienced Middle East affairs analyst.

His research interests include neuroethics, the evolution of morality, the intersections of cognitive science and national security policy, philosophy of mind and military ethics (such as the ethics of torture interrogation).

He is author of Natural Ethical Facts: Evolution, Connectionism, and Moral Cognition (MIT Press), co-author of Warlords Rising: Confronting Violent Non-State Actors (Lexington Books), and has published on topics ranging from the morality of torture interrogation to the rhetoric of evil in international relations, in venues such as Nature Reviews Neuroscience, Biology and Philosophy, and International Studies. He is a reviewer for multiple academic presses and journals and has conducted numerous refereed conference presentations.

Dr Casebeer has a bachelor of science in political science, a masters in philosophy, a masters in national security studies, and a joint PhD in cognitive science and philosophy.